The Colton story began in 1879 when L. J. Wolford, Roy Woodworth and Dr. Cole, being dissatisfied with the proprietor of Uniontown, decided to found a town of their own. They acquired the property from Gregory Koshier and the town was platted that year.

The main road at that time was from Pullman through Johnson which made the Steptoe Canyon road the best route to the river grain terminals through Colton insuring early success of local businesses. The present highway (SR195) was completed in the early ‘30’s. In 1881 the city government was formed with a mayor, three councilmen and a town marshal In 1888 the Northern Pacific completed the rail line from Pullman to Genesee through Colton with two round trips a day, one passenger and one freight. The first Catholic church was built in 1891 across from where the city shop is now. The present church was built in 1905.

Town of Colton, Washington
Incorporated in 1890 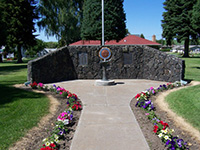